By Angie Reed
On Monday, March 21st there will be a Silent Auction at the Meeting House at 6:30PM
before the start of our Woman’s Society Meeting at 7;00 PM. Please contribute home
baked goodies, fudge, your gently used items, and hand made items for our silent auction. We would like items to be available for a preview on Sunday, March 20. Early bids accepted at that time.
Because of the concert Young Friends are hosting on Saturday night, we ask that you do
not bring your items earlier than Sunday. If this is inconvenient, please see a Woman’s Society Member so storage arrangements can be made.
A portion of these funds goes to the Adopt-a- Nurse program.

Wendy Schlotterbeck
Dec. 2010 – Feb. 2011
Young Friends
1. On December 19, our special guest at Young Friends was Daphne Clement. The youth shared their biographies and their thoughts about God. They asked many questions of Daphne and she deftly answered them! It was a deep, rich conversation about being human and making sense of our faith. (8 youth and 2 adults attended)

2. We published our first issue of “Forever Friends”, the Young Friends newspaper. The
first issue features an interview with Bee Douglas, many photos and a comic strip. If you
have not seen it yet, check out the library table for a copy. We have eager journalists who want to interview, write articles, photograph, draw cartoons, write stories and poems and see their work in print. Stayed tuned for issue 2 – planned to be out the end of February.

3. At our January meeting, we had a lovely time of sharing, then made pretzel dough for the FQM which would be held the following Sunday. (8 youth and 1 adult attended)

4. FQM- During a special Sunday School, the children and youth had a great time hearing the legend of the pretzel and a story, “God’s Hands”, about 2 Jewish men, a rabbi, and 12
loaves of Challah bread. (8 children/youth and 4 adults attended)

5. On February 18, we discussed the upcoming concert, planned publicity and tickets sales.
Then we listened to our special guest, Sukie Rice, answering our MANY questions about the Kakamega Orphan project. We plan to donate part of the proceeds from the concert to this project. (3 youth and 2 adults attended)

Passages
The high school group meets twice a month. On Sunday, Dec 12, we visited Sabbothday Lake Shaker Meeting. (4 youth and 1 adult attended) We have been discussing Faith and Practice especially regarding what Quakerism has to say about politics and war/conflicts. On January 30, our special guest was Markus Schlotterbeck. On February 13, we watched the documentary “Traces of the Trade.” This movie was made by a Connecticut woman who recently discovered that her grandparents and likely, the whole town of Bristol, CT benefited from the slave trade. It confronts issues of prejudice and white privilege.﻿ 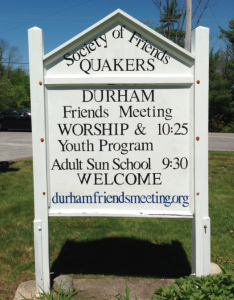